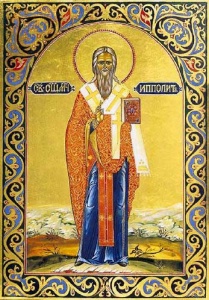 Not much is known of his early life, but we do know that Hippolytus, a Greek, was a pupil of Irenaeus, who was a disciple of Polycarp, who was disciple of John the beloved disciple of Jesus. He became the head of a respected school of theology and a bishop in or around Rome. Subsequently he came into conflict with Pope Callistus (Calixtus), who was elected pope in 217 A.D. , but whom he considered heretical. He established himself as an anti-pope (i.e., one who claims to exercise the office of pope without the valid authority to do so) and remained in schism (though not a heretic) until the year 235 A.D. In this position he prepared a liturgical handbook, “Apostolike Paradosis” [“paradosis” is a Greek word meaning to “hand on the Word of God” which can also be translated as “tradition”], which contains the earliest evidence for the Roman Eucharistic prayer used in the Catholic Mass. His schism continued after the martyrdom of Pope Callistus in 222 A.D.