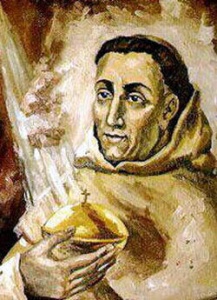 Blessed John Soreth was elected the General of Carmelites unanimously in 1451. This great man was one of the most prominent Priests of the Church. During his generalship, he reformed the Order and organized the Carmelite Sisterhoods. The first Convent of Carmelite nuns was formally founded at Guelder, Holland, on October 14, 1453. It must be mentioned here, however, that long before this time, pious women were affiliated with the order of Carmel, as, for example, Blessed Angela of Bohemia, Blessed Jeanne of Tulouse, in 1268, and her companion, Anne of Tulouse. Bl John Soreth soon established another Convent of Carmelite nuns in Liege, in 1463, over which he placed Blessed Frances d’Amboise, former Duchess of Brittany, who shed new lustre on the Order of Carmel, by the holiness of her life.