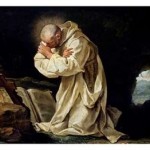 He became a hermit under Abbot St. Robert of Molesmes but then moved on to Grenoble with six companions in 1084. They were assigned a place for their hermitages in a desolate, mountainous, alpine area called La Grande Chartreuse, by Bishop St. Hugh of Grenoble, whose confessor Bruno became. They built an oratory and individual cells, roughly followed the rule of St. Benedict, and thus began the Carthusian Order. They embraced a life of poverty, manual work, prayer, and transcribing manuscripts, though as yet they had no written rule. The fame of the group and their founder spread, and in 1090, Bruno was brought to Rome, against his wishes, by Pope Urban II as Papal Adviser in the reformation of the clergy.