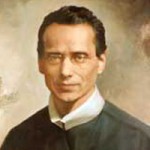 When a child, asked by his mother what he intended to be, he pointed to the picture of his patron, St. Francis Xavier, and said: “I’m going to be another St. Francis.”

After ordination, he was assigned to St. James, Baltimore.

In May 1845, he was sent to Pittsburg, where he had as superior Ven. John Neumann.

In 1851 Father Seelos was appointed superior of the Pittsburg community, where he laboured untiringly for nine years.

His confessional was constantly besieged by crowds of people of every description and class. It was said by many that he could read their very souls.