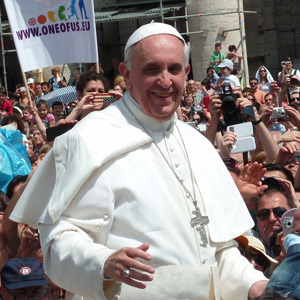 Pope Francis’ interview for global Jesuit publications – which we reported on last Friday – has garnered much attention from the mainstream press. Much of what was put to print has been confined to commentary on what has been described as “blunt” comments against Catholics speaking on the topics of abortion, homosexuality and contraception. But what did Pope Francis really say? We took the liberty of compiling four of the best reports and commentaries we have come across to date. Feel free to add your own in the comments section.

Pope rejects church of ‘small-minded rules’ in Jesuit interview – John L. Allen Jr., National Catholic Reporter:
John Allen makes a first-report on the interview, summarising the Pope Francis’ comments on the Church’s need for a merciful approach to evangelisation, in particular to those with same-sex attraction.

Letter #89: Afterthoughts – Robert Moynihan, PhD., The Moynihan Letters:
Dr Moynihan explores the person of Pope Francis as revealed in the early stages of the interview – how his encounter and relationship with Christ has shaped the man he is today.

Pope Francis’ comments on homosexuality in the Big Interview – Fr. John Zuhlsdorf, Fr Z’s Blog:
Fr Zuhlsdorf provides commentary on the now infamous portion of the interview which deals with the Church’s voice on moral issues, what the Pope said in reality, and how this portion was left misconstrued in much of the mainstream media reports.

Francis, Our Jesuit Pope – R.R. Reno, First Things:
Dr Reno issues a criticism of Pope Francis’ approach, emphasising that our new pope will inevitably make some mistakes in how his message is received by the secular Western culture.