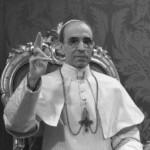 On 2 March 1939, Eugenio Pacelli became first Secretary of State to be elected Pope since Clement IX in 1667. Both before and throughout WWII he worked for peace. On 24 December 1942 and 2 June 1943, he forcefully denounced the extermination of peoples on account of race. Through the Pontifical Aid Commission, Pius XII operated a vast program of relief to the victims of the war on both sides, but especially to the Jewish people. When Hitler occupied Rome on 10 September 1943, after the fall of the Italian government, the Pope opened Vatican City to Jewish refugees. It is estimated that Pius XII aided more than 1,500,000 refugees, including Jews, throughout the war, especially by granting them Vatican citizenship. Under his encouragement, a vast underground of priests, religious, and laity throughout Italy, served as a pipeline to save Jews and non-Jews alike from the Nazi government. His efforts were so sucessful that the leader of the Jewish community in Rome praised him, and after the war himself converted to Roman Catholicism.