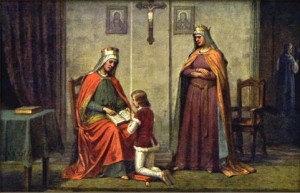 Son of Vratislav I, Duke of Bohemia, whose family had been converted by Saint Cyril and Saint Methodius, and Drahomira, daughter of a pagan chief; she was baptized on her wedding day, but who apparently never seriously took to the faith. Grandson and student of Saint Ludmilla. Duke of Bohemia, ascending to power when his father was killed during a pagan backlash against Christianity, which he fought against with prayer and patience. Murdered by his brother Boleslaus at the door of a church; killed for political reasons, but normally listed as a martyr since the politics arose from his faith. Miracles reported at his tomb. Subject of the Christmas carol Good King Wenceslas.