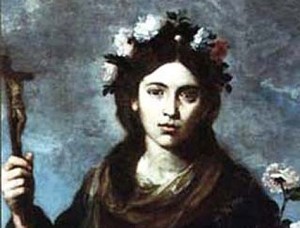 St Rose of Viterbo was born in 1233. As a child growing up she had a great desire for prayer, being an aid to the poor and being strict on herself. She became a third order Franciscan at the age of ten and began preaching in the streets about sin and the sufferings of Jesus. She died in her father’s home in 1251 and declared a saint in 1457. Rose is the patron saint of the Franciscan youth.