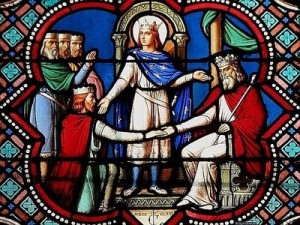 In Louis IX of France were united the qualities of a just and upright sovereign, a fearless warrior, and a saint. This crusading king was a living embodiment of the Christianity of the time: he lived for the welfare of his subjects and the glory of God. His father was Louis VIII, of the Capet line, and his mother was the redoubtable Queen Blanche, daughter of King Alfonso of Castile and Eleanor of England. Louis, the oldest son,* was born at Poissy on the Seine, a little below Paris, on April 25,1214, and there was christened. Much of his virtue is attributed to his mother’s care, for the Queen devoted herself to her children’s education. Louis had tutors who made him a master of Latin, taught him to speak easily in public and write with dignity and grace. He was instructed in the arts of war and government and all other kingly accomplishments. But Blanche’s primary concern was to implant in him a deep regard and awe for everything related to religion. She used often to say to him as he was growing up, “I love you my dear son, as much as a mother can love her child; but I would rather see you dead at my feet than that you should commit a mortal sin.”