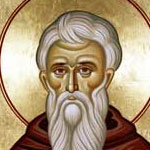 Raised in a pagan family and converted to Christianity while studying at Alexandria as a teenager. He studied with Saint Anthony the Great in the Egyptian desert in 306. He then gave away his wealth, and introduced the eremitical life in the Gaza region of Palestine. He founded several monasteries in Palestine, and was known for his ascetic life – for years eating just fifteen figs a day.