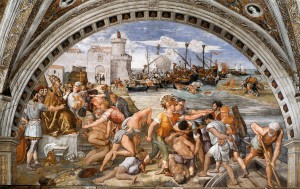 He saw the Saracens attack Rome in 846; upon his ascension, to prevent its recurrence he fortified the city and its suburbs, building a wall around the Vatican, fortifying the part of Rome still called the Leonine City. Rebuilt Saint Peter’s. Rebuked Saint Ignatius of Constantinople for deposing bishops without his knowledge. Crowned Louis II joint Holy Roman Emperor with Lothair I in 850. Crowned Alfred as king of England in 853.