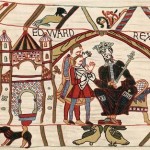 During his reign Edward repulsed invasion, helped restore the King of Scotland to his throne, remitted unjust taxes, and was noted for his generosity to the poor and strangers, and for his piety and love of God. He married to satisfy his people, but he and the queen remained chaste. Reported to have the power to heal by touch. Built churches, including Westminster Abbey.