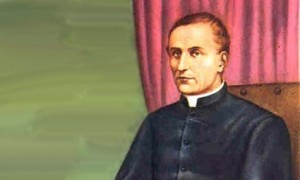 Blessed Francis Faa di Bruno was born on the 29 May 1825 in Alessandria, Italy.  He was a committed scholar who put much of his energy into charitable activities. He founded the Society of St Zita for maids and domestic servants, later expanding it to include unmarried mothers, among others. Francis helped establish hostels for the elderly and poor. He even oversaw the construction of a church in Turin that was dedicated to the memory of Italian soldiers who had lost their lives in the struggle over the unification of Italy. As a priest, he continued his good works, sharing his inheritance as well as his energy. Blessed Francis Faa di Bruno died 27 March 1888 in Turin, Italy and was beatified by St John Paul II in 1988.