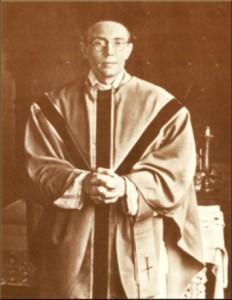 Bl Karl Leisner was born on 28 February 1915 in Rees, Germany. He studied theology in the Diocese of Munster and tried to establish Catholic youth groups, but since the Nazis sought to control all youth work, he had to take teen-agers on “camping” excursions to Belgium and the Netherlands, where they could freely discuss the Church’s teaching. His studies were interrupted by six months of compulsory work service in agriculture, but despite Nazi opposition, he organized Sunday Mass attendance for his fellow workers. The Gestapo raided his home and took his diaries and papers. These documents, carefully preserved in Nazi archives tell how the spiritual young man became a heroic religious leader.