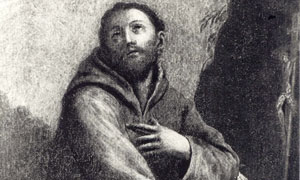 St. Francis (1182-1226) was born and died in Assisi. He was the son of a rich merchant, Bernardone, received a good education, and in the beginning followed the ways of the world. He was taken prisoner in the battle between the Assisians and Perugians, and after his release decided to abandon everything for Christ. His father became extremely displeased at his action, and disinherited him. In 1220 he founded a new order which in ten years numbered five thousand brothers. His ardent love of God merited for him the name of Seraphic.