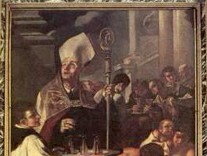 Blessed John of Parma was born in Parma, Italy in 1209. He is known for his piety and learning that God called him to bid good-bye to the world he was used to and enter the new world of the Franciscan Order.  When John became general he returned the order to a spirit of poverty and humility of their founder St Francis of Assisi. Like Francis, John travelled on foot and he was accompanied by one or two companions. He died in 1289 and was beatified in 1781.